Home >> Buying Guides >> What Chimney Cowls Are Best for Stoves?

Many people spend hours selecting the right wood burning stove for their home – and quite rightly! It’s a big investment. But what many people fail to think about when picking a stove, is their chimney. The chimney, and chimney cowl, play an important part in the proper functioning of your stove. It’s important they are also up to scratch. So, keep reading to discover which chimney cowls are best for wood burners.

What is a chimney cowl?

As you can see, they do quite a lot!

Chimney cowls vary in style, size and function. Chimney caps can range from basic bird guards through to more comprehensive ‘pot hangers’ that are designed to significantly boost the draft of your chimney.

The majority of chimney cowls are made from stainless steel, which is not only strong and lightweight, but also resists rusting. You can find ‘spinning’ chimney cowls on the market, which use the passage of wind over the opening of the chimney to generate significant draw from the fire. However, these tend to be the most expensive type of chimney cowl and aren’t suitable for all types of chimneys.

Why should you use a chimney cowl with a stove?

Now that we’ve established exactly what a chimney cowl is, you might be wondering if you need one for your stove at home.

The answer is ‘almost certainly, yes.’

As we’ve already mentioned above, there are a range of different factors that can impact the performance of your stove.

To put it even more bluntly – if you want your stove to operate at top performance, you need a chimney cowl.

Below we’ve set out the main problems that chimney cowls can solve.

This causes your stove to give off puffs of smoke into your living space. The downdraft also hampers the stove’s ability to properly burn its fuel – so a downdraft can also reduce the efficiency and heat output of your stove.

Downdraft is typically caused by the chimney either being too tall, too short or situated in the vicinity of buildings or objects that disturb the air currents around the chimney. Chimney downdraft typically only happens on certain days when the wind is blowing across the top of the chimney in a particular direction.

Of course, you can reduce or eliminate chimney downdraft entirely by installing an anti-downdraft chimney cowl atop your chimney. Doing this is one of the most effective ways of improving the performance of your stove.

The weather can have more of an effect upon the performance of your stove than you may realise.

In addition to downdraft issues, a chimney without a cowl is much more prone to be damaged by the elements. With no cowl in place, the wind and rain will be able to enter your chimney cavity.

Over time, a build up of moisture in your chimney – particularly during periods when you’re not using your fire – can damage the lining of your chimney, requiring costly repairs.

A good quality chimney cowl will have a ‘hood’ (rather like an umbrella) that will stop the majority of rain, snow and sleet from getting into the chimney cavity.

If you are having consistent problems lighting and maintaining the fire in your stove, then your chimney may have a draw problem. If this is the case, then installing a rotating/spinning chimney cowl can significantly improve the draw of your chimney.

Bird nests are a leading cause of chimney fires. Beyond that, bird nests in chimneys are also unhygienic, a source of pests and can cause damage to the inside of your chimney.

In addition, it’s an offence under the UK’s Wildlife and Countryside Act 1981 to intentionally damage or remove an active wild bird’s nest.

So, you really don’t want to end up with birds nesting in your chimney.

The majority of chimney cowls will prevent birds or other critters from entering your chimney. Here at Direct Stoves we stock chimney cowls that are solely designed to prevent the egress of birds, through to more multi-purpose cowls that’ll keep birds out whilst also preventing downdraft etc.

So as you can see, it’s well worth investing in a chimney cowl!

How do you install a chimney cowl?

Chimney cowls are generally straightforward to install. Pot hanging cowls are designed to be installed without removing the chimney pot. They simply sit on top, are connected to the flue liner and then secured in place with three straps which hang down from the main body of the cowl.

Another type of easy-to-install chimney cowl are ‘weathering caps’. These are caps which attach to the end of a flue system. As they are a wider diameter than the chimney pot or cavity, they simply sit atop the chimney. The weight of the attached flue system ensures that the weathering cap remains in place.

Other types of chimney cowls are ‘screw fit’, and simply screw on to the top of a flexible chimney flue liner. Just select the diameter that corresponds to the diameter of your flue liner.

Tip – whilst it’s possible to fit a chimney cowl yourself, we recommend using a chimney or roofing professional, especially if the job will involve working at height.

How much does it cost to install a chimney cowl?

As we’ve outlined above, provided you buy the right size and diameter chimney cowl for your chimney, installation should be a relatively straightforward job.

Generally, if you are installing a new stove and chimney flue liner, then simply ask for a chimney cowl to be installed at the same time.

However, if you already have your stove and liner installed, then the cost of installing a chimney cowl varies between £150 – £250 (for labour time only – this doesn’t include the cost of scaffolding or other equipment that may be required).

The price you’ll pay will be largely determined by where you are based in the UK.

How long does it take to install a chimney cowl?

Provided that there are no major issues and that the rest of your chimney is in good working order, you should expect the installation of a chimney cowl to take between one and two hours.

This time may vary if the worker has to set up scaffolding or other equipment in order to gain access to your chimney.

How much do chimney cowls cost?

If this article has convinced you of the benefits of chimney cowls, you may be wondering how much you’ll have to pay for one.

The answer largely depends on what you want the chimney cowl to do.

The best chimney cowls for stoves and wood burners

So, what next? If you’ve decided that you want a chimney cowl, and you know what type will work best for you, explore some of our most popular chimney cowls below. 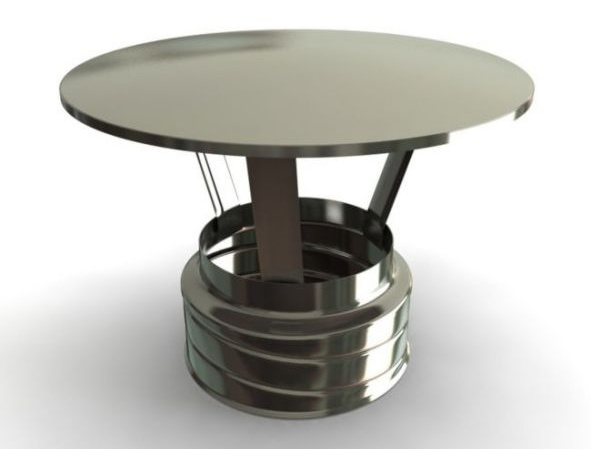 This is a basic chimney cowl that’s primarily designed to stop rain, snow and sleet from getting into your chimney cavity and causing damage.

With a screw fit design, this chimney cowl is designed to be matched with a flexible chimney flue liner of corresponding diameter. 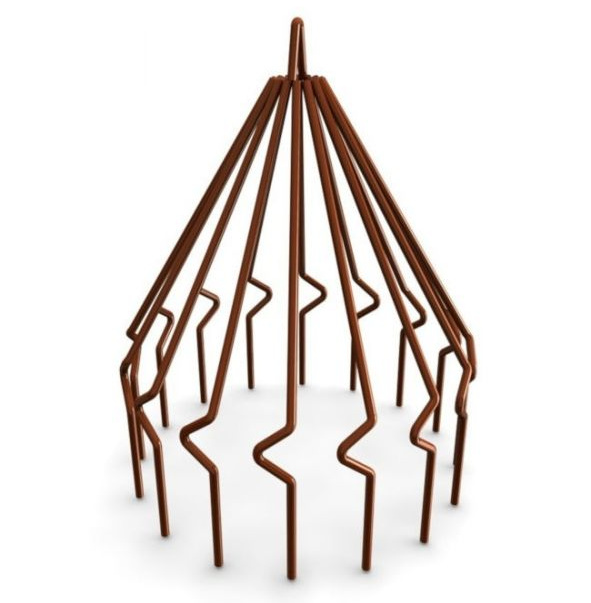 If the weather or downdraft isn’t much of a problem for your chimney, then you may opt to use a dedicated bird guard instead.

This Jackdaw Bird Guard won’t prevent the ingress of rain into your chimney or tackle downdraft issues, but it will stop all types of birds from entering your chimney and nesting.

Made from sprung 316 grade steel, this bird guard is designed to withstand break in attempts by all types of birds, squirrels or other critters. 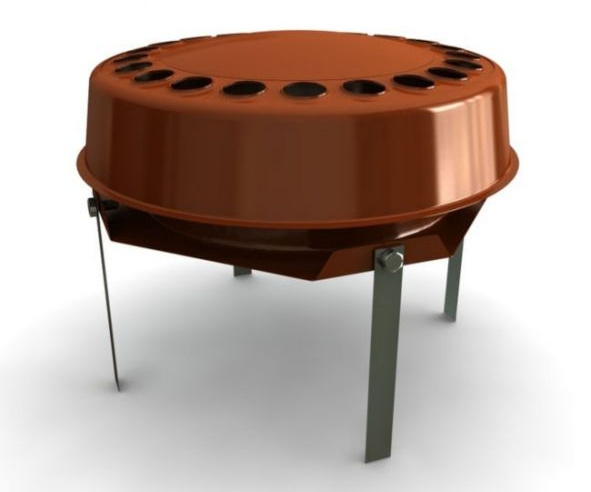 Is downdraft causing you headaches? Then eliminate it with this great value anti-downdraft cowl.

Designed to work with a standard chimney pot, this 316 grade steel, anti-downdraft cowl prevents wind from blowing back down your chimney, therefore greatly improving the performance and efficiency of your stove.

Designed to be held in place with a chimney flue liner, this Dura Flue Weathering Cap will prevent the elements from getting into your chimney cavity and causing expensive repair bills.

Manufactured from high-quality stainless steel and with a long warranty, the Dura Flue Weathering Cap is a great option if you’re going to be installing a chimney flue liner at the same time as a chimney cap.

As weathering caps are designed to connect directly to chimney flue liners, they are available in a range of different diameters – so when buying, ensure you choose the correct size! 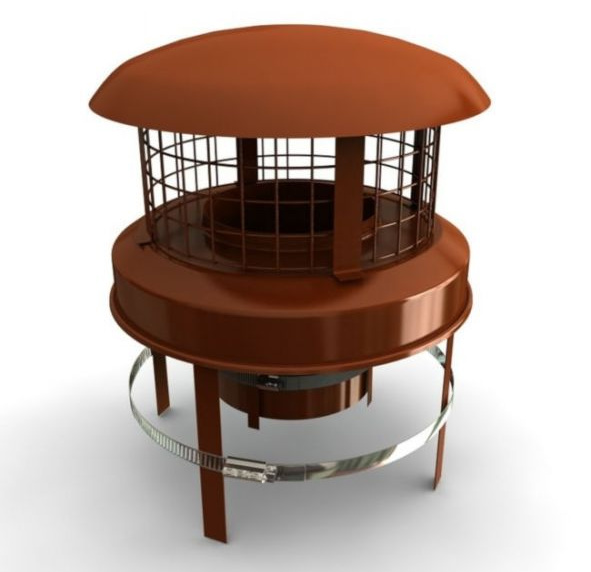 This particular pot hanger rain cap is available in two colours (terracotta or stainless steel), is made from high-quality 316 grade stainless steel and comes with a 15-year guarantee.

The complete ‘all-rounder’, this is a chimney cowl that’ll do it all. From fighting downdraft and improving updraft, to preventing entry of birds and weather alike, the Mini Anti-Downdraft Pot Hanger Rain Cap is a great value choice if you’re looking for a complete chimney cowl solution.

This chimney cowl is constructed from quality 316 grade steel and comes with a 15 year warranty.

Improve the performance of your stove today

For a relatively small investment, you can give your stove’s efficiency and heat output a real boost.

What Parts and Accessories Do I Need to Fit a Stove? | A Complete Guide to Flue Liners for Your Stove | When Is It Time to Replace Your Wood Burning Stove?