What’s better than a traditional wood burning stove? A double-sided wood burning stove! If you have a chimney breast that adjoins two rooms, or you have a large open plan space that would benefit from a stove, then a double sided stove is the perfect option. Read on to find out more about the benefits of double sided stoves as well as the best options available for large rooms and open plan spaces.

What is a double sided stove?

Well, as the name suggests, a double-sided stove is simply a stove with two fronts (you sometimes see them referred to as ‘double fronted stoves’).

This means that you effectively have two openings to the stove. This has a number of benefits such as:

Because of these benefits, double sided stoves are the ideal option for heating large spaces. Here at Direct Stoves we have customers who have installed double sided stoves as focal points in the centre of a large open plan room. Others have decided to install a single depth stove in a new chimney stack and knock two rooms into one.

In short, if you’re creating a larger room within your home, a double sided stove may be the perfect heating option to accompany the new, larger, more open space. 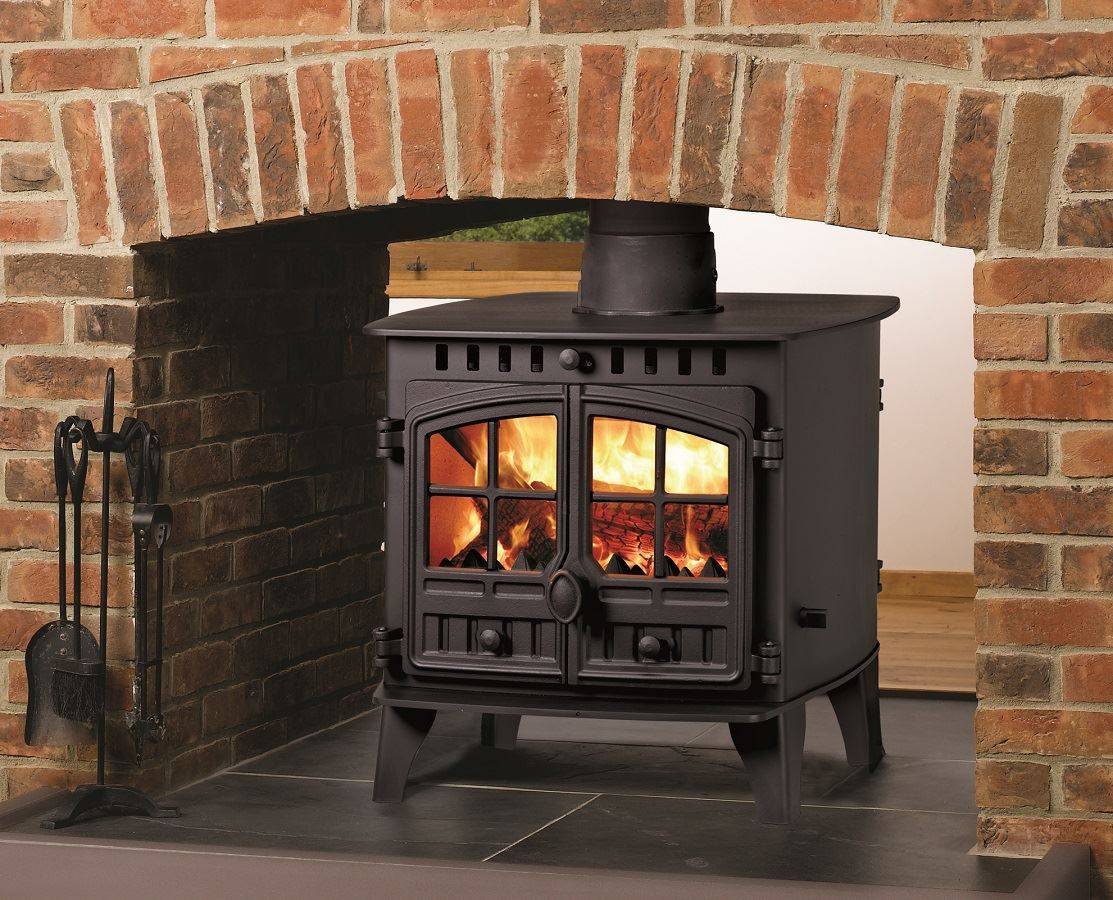 What is the difference between single depth and double depth double sided stoves?

So, what’s the difference?

As the name suggests, single depth double sided stoves are more compact than their double depth siblings. They are designed to sit within smaller spaces, such as within fireplace cavities. Choose a single depth stove if you don’t want your stove to dominate your room.

If you want your stove to be the focal point of your room, or you’re going to be placing it in a very large space, then choose a double depth double sided stove. As you may have guessed, double depth stoves are a lot deeper than single depth stoves, so they are ideal if you are trying to heat two rooms that are separated by a very thick wall or adjoining chimney breast.

To give you an idea of the difference between single depth and double depth stoves let’s compare two examples. 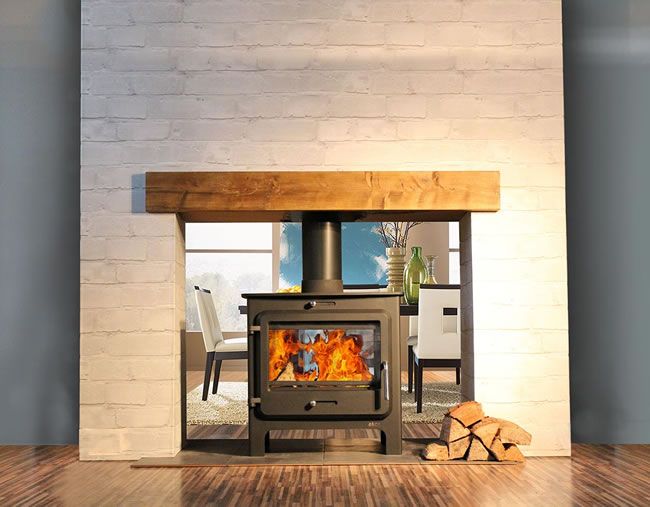 Where can you place a double sided stove in your home?

So far we’ve talked about all of the exciting possibilities that double-sided stoves can open up in terms of your home design. However, where exactly can you put them? They are certainly very different from traditional fires which require a full chimney breast.

We are often asked if you can place a double sided stove in the centre of a room. The answer is a resounding ‘yes’. However, you’ll need to make sure that you have an appropriate hearth, chimney flue and you’ll need to adhere to building regulations and have the work signed off by your local authority upon completion.

We strongly recommend that you use a HETAS-qualified installer to fit your stove.

Guide – Find out more about fireplace installers in our sister company’s dedicated guide: What Qualifications Should a Fireplace Installer Have?

What fuels can double sided stoves use?

This means that if you have a feature wall in the centre of a large room or you want to embed a double sided stove in an adjoining wall so you can heat two rooms, you now have the option to do so.

Here’s an example of a popular inset double sided stove: 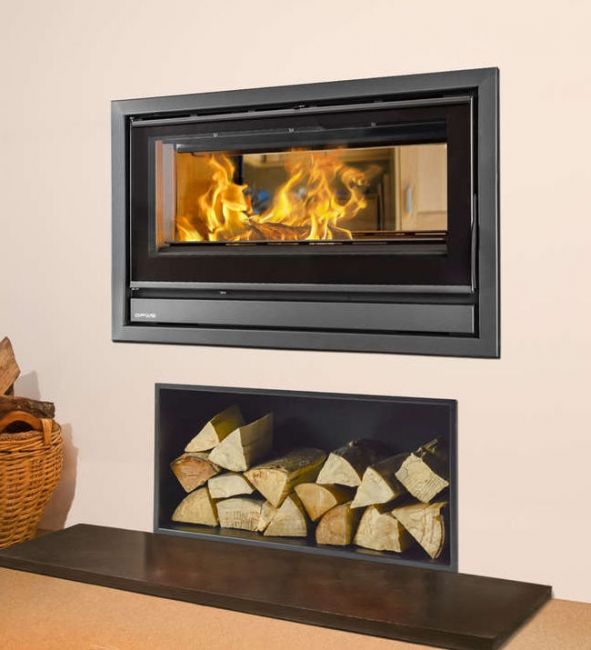 The Opus Tempo 70 is a visually stunning double sided inset stove. It has been designed to perfectly connect and heat two rooms with the warmth and glow of a real fire. With its large windows on both sides you’ll always get an amazing view of the fire inside – no matter which room you’re in!

It also features a powerful heat output of 6kW and energy efficiency of up to 75%. So, if you’re looking for an inset double sided stove, this is the perfect choice.

The best double sided stoves for your home

Now that we’ve taken a look at many of the questions and considerations around double sided stoves, it’s time to take a look at which stoves are best for the home. We’ll take a look at traditional and modern stoves alike and we’ll also include some slightly more unusual options for the more adventurous home designers amongst you.

Let’s take a look at the best double sided stoves for the home. 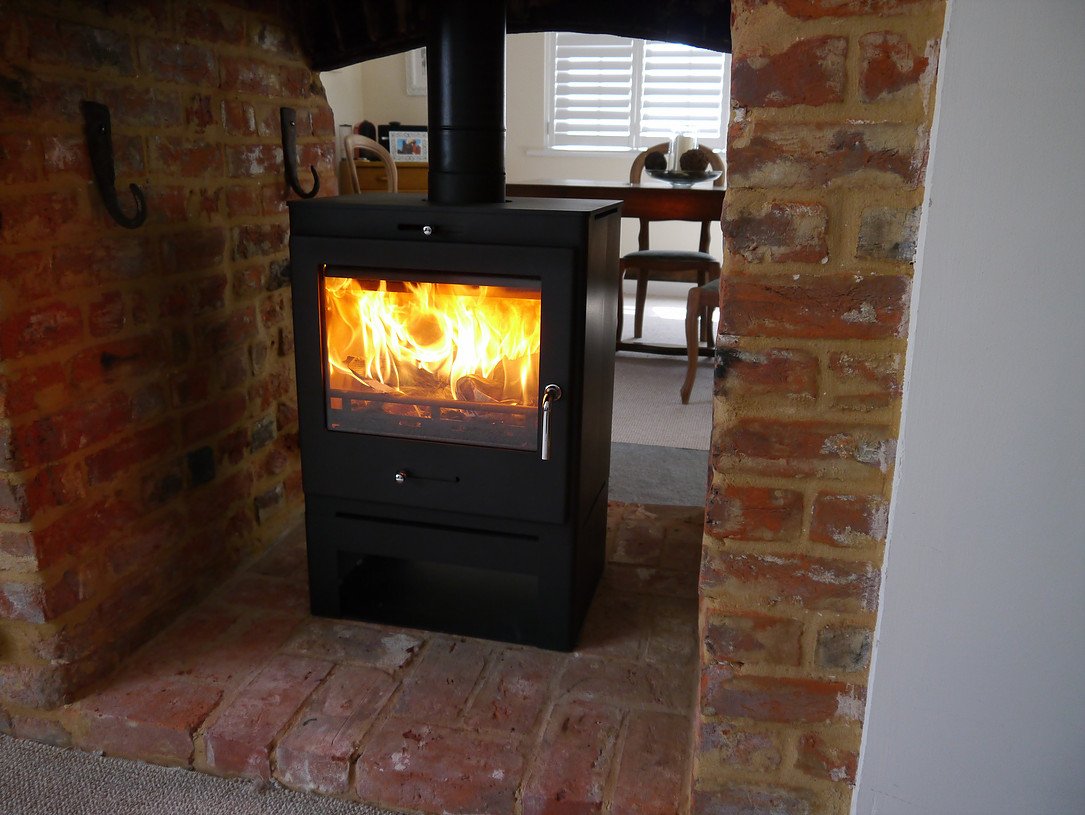 The Bohemia 60 is a stylish, contemporary double sided stove, perfect for modern homes. It features a powerful 8kW heat output with an efficiency of 79%. The Bohemia 60 offers flexible fuel options too. You have the choice of using wood or other types of solid fuel.

This is also an environmentally-friendly stove, featuring clean burn technology meaning that it is DEFRA approved and suitable for use in smoke control areas. 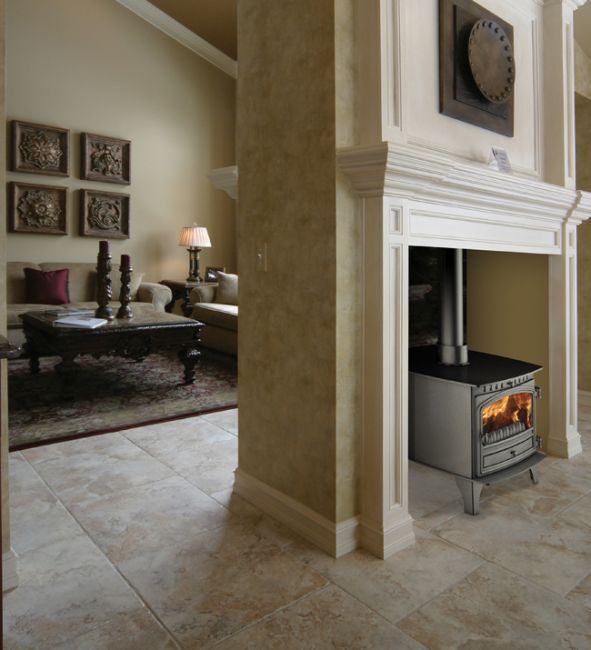 If you’re looking for a more traditional stove, then the Hunter Herald 8 is a great option.

Manufactured in the UK, the Hunter Herald 8 radiates heat 360º making it perfect for large open rooms. As it’s a double depth stove, it will comfortably fill a large fireplace or sit within a large adjoining wall.

It’s not just large in size. It has a large heat output too. Putting out 11.5kW at 79% efficiency means this stove will quickly heat large spaces. What’s more, it also comes complete with a 5-year guarantee. 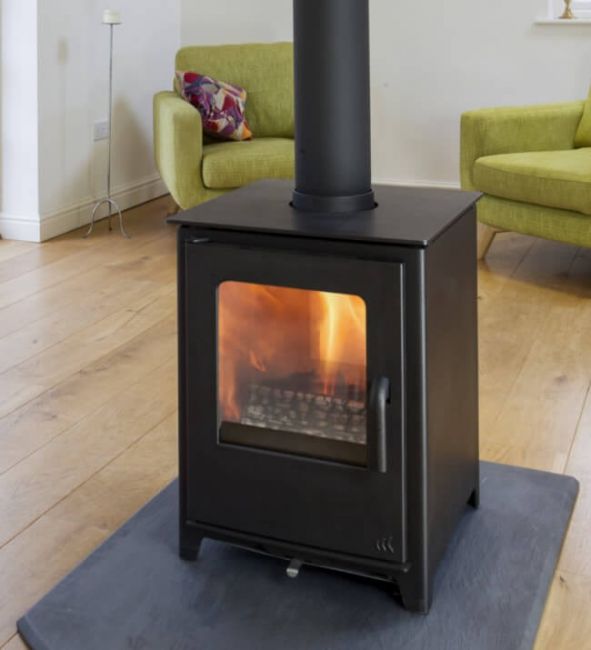 Do you want an eye-catching stove that’ll act as a focal point in the centre of your large room? Then you’ve just found it in the Mendip Loxton 8 stove.

Designed and manufactured here in the UK, Mendip stoves combine the best combustion techniques with sleek, contemporary design. All of their stoves are Ecodesign ready and this one is no exception.

The Loxton 8 exudes quality thanks to its 5mm steel body, static cast iron grate, vermiculite lined chamber and a convecting top plate which provides great heat distribution. Thanks to its 8kW heat output and fantastic 81.8% efficiency, the Loxton 8 will quickly heat your home, whilst keeping your fuel bills low. 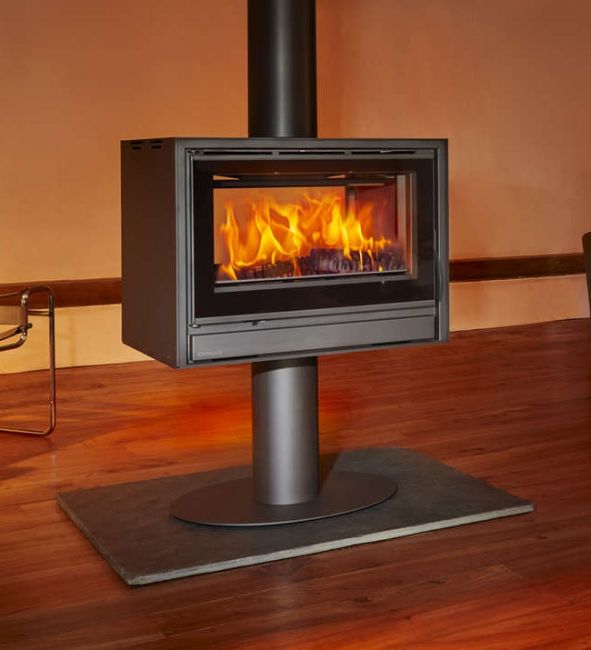 Why watch television when you can watch a fire? The Opus Tempo 80 has been designed to put the fire at the front and centre of your living room. It’s sleek Scandinavian design is perfect for those of you seeking a minimalistic home decor.

Featuring bench and pedestal stands, the Opus Tempo 80 has a massive 14kW heat output, meaning it can easily heat up two rooms at once, or heat up a large room.

All of that performance doesn’t come at the expense of the environment or your heating bills though. The Opus Tempo 80 is a very clean and efficiently burning stove as it is Ecodesign ready and features an energy rating of ‘A’. 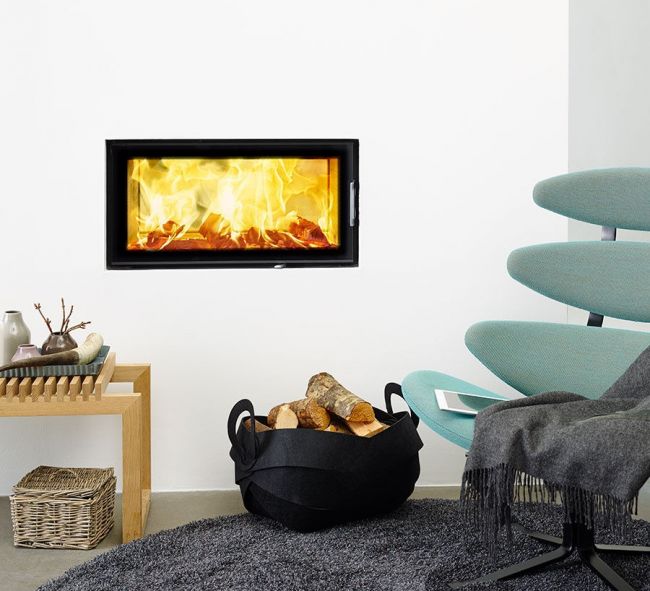 As we mentioned earlier, inset double sided stoves are becoming increasingly popular, and with stoves such as the Morso S120-21 it’s easy to see why.

Morso has been producing stoves in Denmark since the late-nineteenth century and continues to innovate today. That’s clearly the case with the S120-21 which features a clever convection system and an airwash system to burn wood efficiently (this stove has achieved an A energy rating). With a heat output of 10kW, it’ll easily heat two rooms simultaneously. 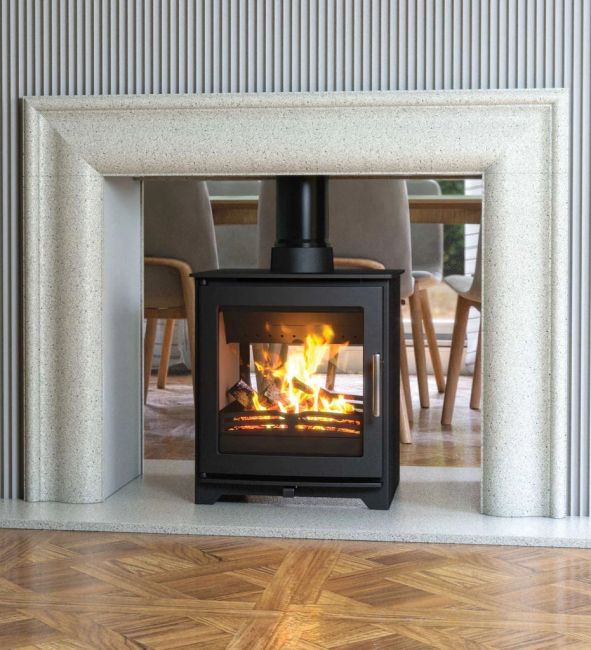 Henley is one of the fastest growing stoves brands in the UK and with stoves such as the Dalewood it’s easy to see why.

The Dalewood is the perfect double-sided stove if you want to show off the flames of the fire, as it comes with a very large viewing glass which creates the feel of an open fire, but with the efficiency benefits of a DEFRA-approved stove.

The Henley Dalewood may look traditional, but its design incorporates the very latest burn technology. It features a tertiary air system which creates a clean-burn whereby hot air is pushed into the firebox above the normal height of the fire. This allows the excess gases to combust, giving you a cleaner burn. This all means that the Dalewood is DEFRA approved, so that you can use it even in smoke control areas. 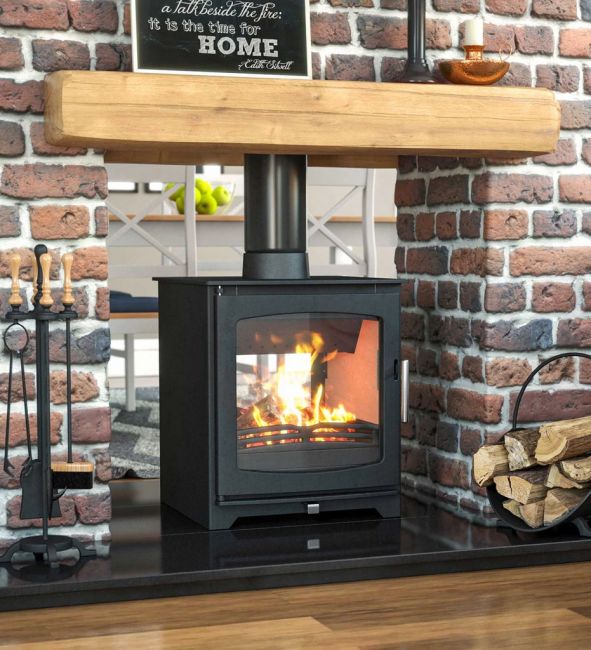 Meeting the highest-possible environmental standards, the Henley Hazlewood is a highly-efficient, clean-burning stove that still retains a traditional look and feel.

Like its Dalewood sibling, the Hazlewood features a tertiary air system, ensuring a clean, environmentally-friendly burn. The Hazlewood also features an air-wash system which helps to clean the stove glass looking clean and fresh.

With a heat output of 6kW and a 77.1% efficiency rating, the Henley Hazlewood is a double-sided stove that’s perfect for large rooms or open-plan spaces.

Heat your home with a double sided stove

So there you have our selection of the best double sided stoves for the home. Whether you want a stove that is contemporary or traditional, eye-catching or subtle, you’ll find a double sided stove to suit you here at Direct Stoves.

Does a Log Burner Add Value to Your House? | The Positives of Buying A Wood Burning Stove | A Complete Guide to Flue Liners For Your Stove