Wood burning stoves have had a bit of a hard time in the press over recent months. It’s primarily been off the back of Mayor of London Sadiq Khan’s call for a ban on wood burners in urban areas, particularly in London, in a bid to try and improve air quality.

Mr Khan asked for the Clean Air Act to be amended to allow for the creation of zero-emission zones after he triggered London’s emergency air quality alert for the seventh time in thirteen months.

It was all looking a bit gloomy for our beloved stoves for a while, but we’re here to right a few wrongs and tell you why having a wood burner is fantastic and that you should be proud to have one in your home!

Why Buy a Wood Burning Stove?

1. The negative stats are misleading

Research by King’s College London estimates that between a quarter and a third of all London’s fine-particle pollution comes from domestic wood burning.

However, it turns out that 70% of wood burning emissions actually comes from open fireplaces, not stoves. The percentage of people outside of south-east England with a stove is much lower (16% in SE England vs 5% nationally), showing just how little the overall impact of stove pollution is.

Blaming wood burners for poor air quality is like fast food companies for being overweight. There are bigger issues at play there.

Related: Are Wood Burners Bad For The Environment?

2. Stoves are much more eco-friendly now

Of course we’re not going to bury our heads in the sand and claim that wood burning stoves are 100% eco-friendly. However, the technology and materials used to make stoves has come a long way, and they’re nowhere near as polluting as they once were, and even less so than an open fire.

While most modern wood burners are greener than their ageing counterparts, Ecodesign Ready stoves are even better for the environment.

By 2022, all wood burning stoves must comply with the Ecodesign European directive in a bid to tackle air pollution and particulate emissions. Many stove manufacturers are beating the directive to the punch and producing Ecodesign Ready stoves that actually exceed the directive by as much as 75%. 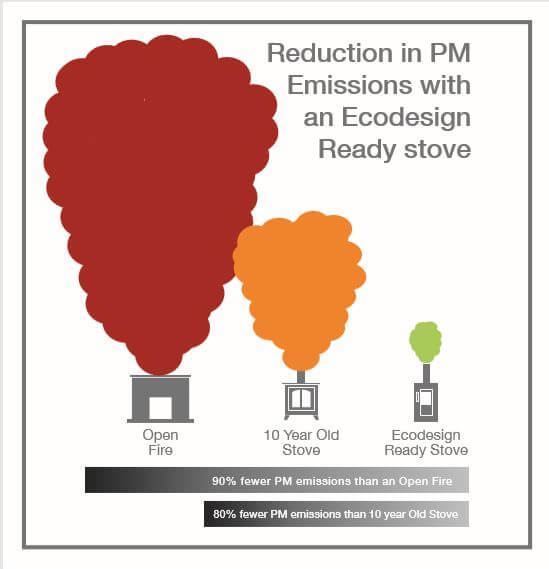 By buying or switching to an Ecodesign ready stove, you’d be contributing to the reduction of wood smoke pollution.

Take a look at our great range of Ecodesign Ready stoves, or learn about our Stove Scrappage Scheme for information on how you can save money on a new stove by scrapping your old one.

Many people get hung up on the negatives around burning wood as a fuel and the emissions it produces, but there’s more to it than that.

Obviously wood is a renewable source and is actually kinder to the environment than using gas or electricity. According to Green Match, wood burning produces 0.008kg of CO2 per kWh compared to 0.198kg for gas and 0.517kg for electricity.

Related: Can Your Stove Help Keep Air Pollution Down?

4. Stand up to energy providers

The price of heating your home is starting to get ridiculous and the government’s promises that they will freeze energy prices seem to get pushed back every year.

However, by burning wood instead you are freeing yourself (partly at least) from the clutches of energy providers. Granted, you do then have to deal with price fluctuations of firewood suppliers, but any increases there are likely to be less severe than gas and electricity price hikes. 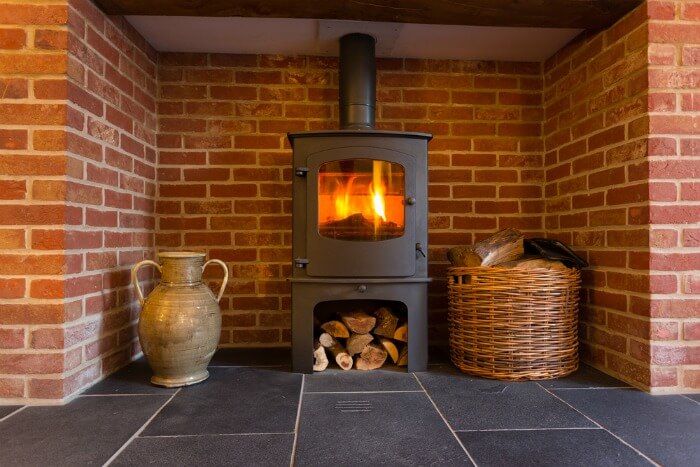 Not only are wood stoves becoming more eco-friendly, they’re also become more efficient. This means that more heat is used to heat your home rather than being expelled up the chimney.

For example, the Mendip Ashcott wood burning stove has an efficiency of over 80%, which means that you’re not losing much heat at all – only 20% is being lost through the chimney and the rest goes into making your home nice and toasty. An open fire loses as much as 75-80% of the heat through the chimney, making them incredibly inefficient at heating homes.

Older stoves will also have a lower efficiency rating, so if you want to ensure you’re getting more heat into your home, then a new stove would be a wise move. Not only is a more efficient stove better for your wallet as you’re spending less on fuel, but it’s also better for the environment.

6. Boiler stoves can heat your water

While also keeping your living room nice and warm, a boiler stove has a back boiler that uses heat from the stove to heat domestic hot water supplies and radiators around the rest of your home. This can save you even more on your heating bills!

7. Some stoves can be used in Smoke Control Areas

Smoke control areas are certain parts of towns or cities in which, under the Clean Air Act 1993, it’s illegal to emit smoke from your chimney.

You may think that means you can’t use wood burners of any kind if you live in such an area – but that’s not the case!

DEFRA approved stoves can, in fact, be used in smoke control areas. This is because they are highly efficient and actually produce very little smoke, and so have been classed as exempt.

So if you live in a Smoke Control Area, don’t think you can’t have a wood burner – take a look at our DEFRA approved stoves.

More information: How to Have a Wood Burning Stove in a Smoke Control Area

We think having a stove is something to be proud of, and we’re sure you’ll feel the same! If you have any questions, don’t hesitate to get in touch with our experts.